By continuing to browse, or by clicking 'Accept', you agree to the storing of cookies on your device to enhance your browsing experience and for analytical purposes. To learn more about how we use cookies, view our cookie policy.

By continuing to browse, or by clicking 'Accept', you agree to the storing of cookies on your device to enhance your browsing experience and for analytical purposes. To learn more about how we use cookies, view our cookie policy.

Our motorcycle sales department consists of 4 salesmen with a combined experience of over 50 years. We are main dealers for Aprilia, Ducati, Kawasaki and Moto Guzzi and stock a wide range of used bikes. We have a full range of products to accompany bike purchases including various finance and warranty packages.

Our clothing department has 3 full time employees with over 20 years experience and stocks motorcycle clothing and accessories from major brands including Arai, Alpinestars, Dainese, Ducati, Richa, Shoei, Belstaff and many, many more. We hold extensive stock and can even offer finance packages from 0% APR for large purchases and all sales made online with a value over £50 have free delivery with our trusted, reliable courier, DPD. We offer a helmet fitting service to ensure that the helmet you buy fits correctly to offer its maximum protection.

Our state of the art service department features factory trained technicians with over 60 years experience combined. Our workshop is fully equiped with the latest tools and equipment required for all aspects of motorcycle servicing, repair and maintenance. To complete our aftersales team we have two valeters who apply the finishing touches to all our services by making sure that your new, used or serviced motorcycle looks its absolute best. They are also available to collect and/or deliver your bike in our purpose built van, if you're unable to do so yourself.

Behind the scenes, our small office team handle everything business related as well as performing vital sales administration duties such as transferal of ownership and keeping the relevant government databases updated. They also make sure we look our best over our digital channels which consist of facebook, instagram, twitter, autotrader and 4 websites.

In 1989, two young guys had a dream to open their own bike dealership, Phil Bailey and Richard Hersey had worked together in a number of dealerships and it was time to go it alone. 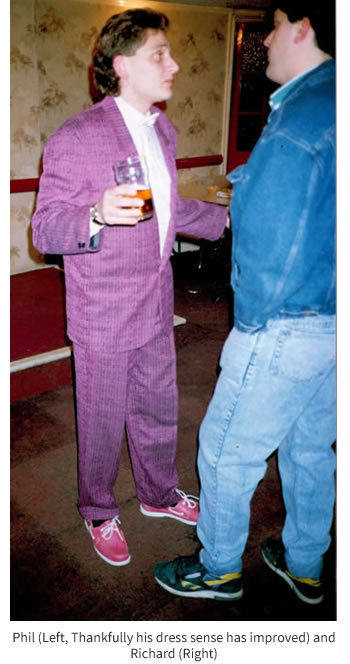 Phil was out in his pickup truck looking for used bikes and popped into Mid Bucks Motorcycles in Cambridge Street Aylesbury, ‘Do you know anyone who wants a bike shop?’ the owner asked. ‘Maybe I do’ Phil replied, and the plot was hatched.

Phil and Richard then got to work on making their dream a reality and on 1st February 1989 On Yer Bike opened for business. 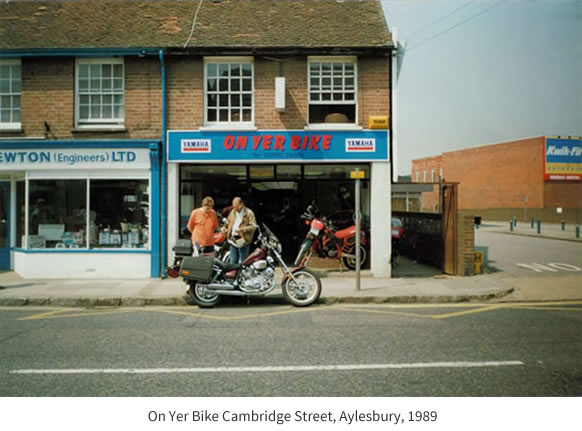 Starting with a Yamaha franchise and a small selection of used machines, On Yer Bike quickly grew to fill every inch of the tiny Cambridge Street Premises, there were even bikes hanging from the wall! When the limited space started to become an issue, Phil and Richard moved the workshop to Evett Close so that the entirety of the Cambridge Street location could be used as a showroom. 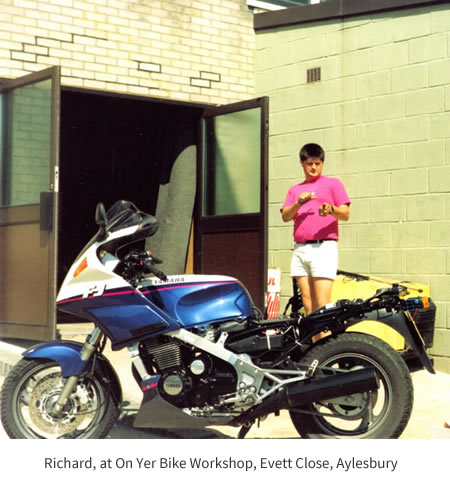 During his many visits to buy used stock, Phil developed a good relationship with Moto Cinelli in Northampton who were the Ducati importers. After some tense negotiations, On Yer Bike was awarded a Ducati franchise in February, 1993. As Lovers of Italian machines, Phil and Richard were both ecstatic.

Tragically, in June 1993 Richard passed away. 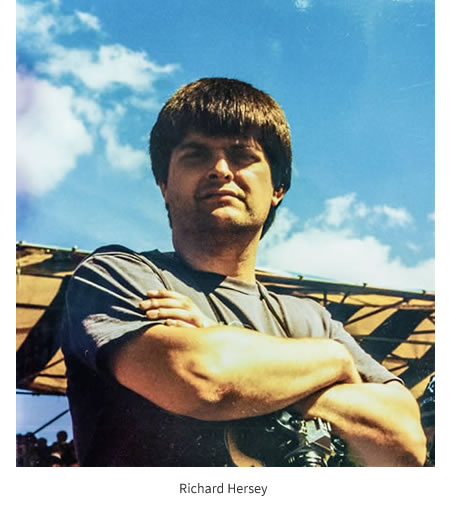 With grit and determination On Yer Bike persisted through these difficult times. As the business continued to grow, space once again became a problem. In 1995 an old happy eater site became available on the main A41 at Westcott. The site needed a total rebuild but it was the perfect opportunity to expand. After a lot of hard work On Yer Bike Westcott opened on 1st October 1996. 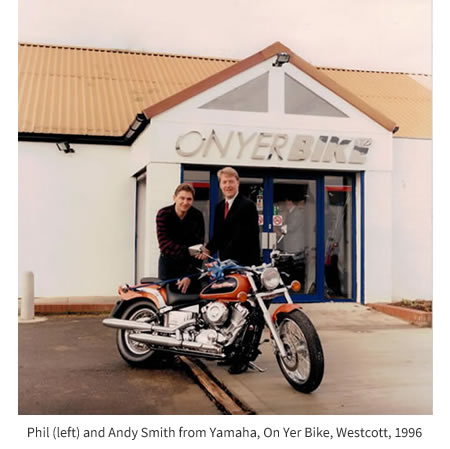 Over the years the site has grown considerably and we opened our stand-alone clothing store, vast aftersales centre and on-site motorcycle training school. 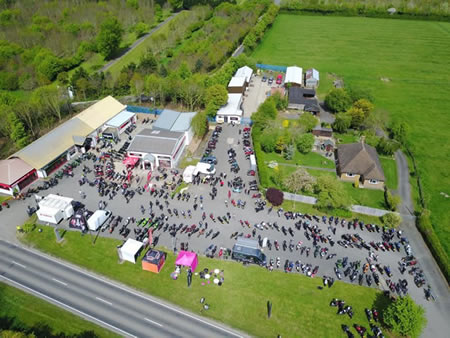 In 1999 we expanded our range and were awarded the Aprilia franchise, in 2004 Kawasaki followed and then almost a decade later in 2013, Moto Guzzi joined the fleet. 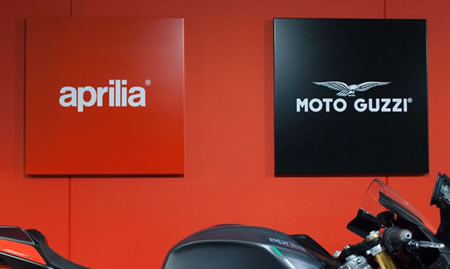 Prestigious awards were given to On Yer Bike by Motorcycle News as dealer of the year in 2002 and again in 2014. We have also been given numerous awards from the manufacturers that we represent. 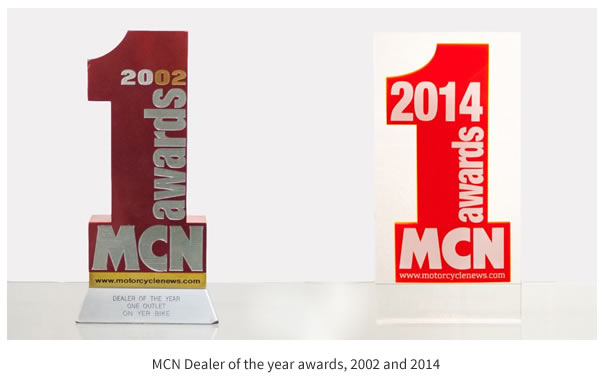 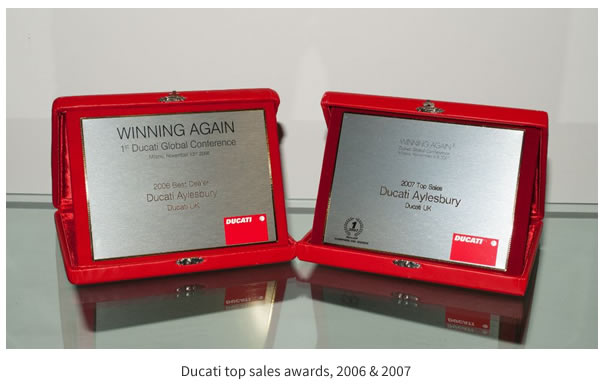 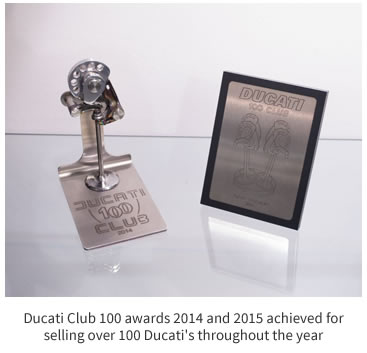 Over the years things have certainly changed, we would like to thank our loyal customers, some of whom have been with us from the very start. Without you, this would not have been possible.